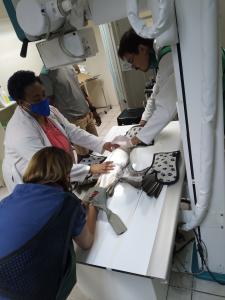 A skilled team of veterinary surgeons conducted successful operations to save the life of Peli Brown, the brown pelican. 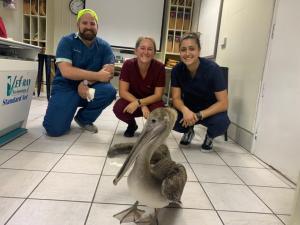 Back on my feet again – a rejuvenated Peli Brown is up and about following his recovery. 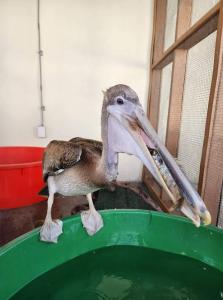 On behalf of Ross Vet, we are grateful to have played a small role in the continuation of this process through the rehabilitation of Peli Brown.”
— Kimberly Stewart, DVM, MS, PhD
BASSETERRE, BARBADOS, January 24, 2023 /EINPresswire.com/ -- Birdwatchers and residents in the coastal areas of St. Kitts and Nevis are urged to be on the lookout, and to report sightings of “Peli Brown”, a male brown pelican whose rescue and rehabilitation by students of Ross University School of Veterinary Medicine (Ross Vet), is the latest encouraging chapter in the environmental conservation success story of the national bird of St. Kitts and Nevis.

Nicknamed “Peli Brown” by its caregivers, the plucky, young pelican was released back into the wild on November 18, 2022, in the area of Whitehouse Bay on the Southeastern Peninsula. This followed over three months of rehabilitation under the care of a team of scientists and Ross Vet students. From rescue to the time of his release, Peli Brown had gained 1.1 kilograms – double his body weight – and became adept at flight and capture of live prey.

A juvenile bird, with a brown neck and head, and grayish bill, Peli Brown can be identified by a blue band placed on his right leg with the registration number G19. This identifier will enable the volunteer team to continue monitoring his progress in the wild to gain valuable information on movement. The band was donated by Scott Rush, PhD, MS, BS, an associate professor at Mississippi State University’s Forest and Wildlife Research Center.

Kimberly Stewart, DVM, MS, PhD, associate professor of exotic and avian medicine and founder of the St. Kitts Sea Turtle Monitoring Network (SKSTMN) led the rehabilitation process. She said sightings should be reported to SKSTMN on Facebook, or to the Sea Turtle Hotline at telephone (869) 764-6664. Dr. Stewart said these reports would be invaluable in helping the scientific team to keep track of Peli Brown’s progress in the wild.

“When I first examined Peli Brown at Ross Vet’s campus, he was weak, emaciated and dehydrated, and a number of abnormalities were evident in his blood work. His second chance at life is owed to the awareness and quick action of the Ross Vet students who noticed that he couldn’t fly, and rescued him as he was being chased and harassed by dogs, near their off-campus living complex at Half Moon Bay.”

Noting that field and rehabilitation settings were a favourite backdrop for student interaction, Dr. Stewart said Peli Brown’s recovery had been a remarkable and heartwarming experience, which the St. Kitts and Nevis public could now share, through reports of sightings. Please note the time, location, and whether the bird was spotted alone or as part of a flock.

“The Whitehouse Bay area is located near to a pelican rookery on the same side of the island, which has nice open, unpopulated spaces for normal behaviors, and there are a lot of pelicans in the area with which Peli Brown would be able to integrate. Since they are wild animals, they should be respectfully observed from a distance. If you have binoculars you can look carefully for the leg band. If you see the leg band please let us know by calling the St. Kitts Sea Turtle Hotline at (869) 764-6664. Also, if you need to report a pelican that is in danger or injured you can reach out to that number as well.”

Dr. Stewart was joined by Andre Escobar, MV, MSc, PhD, Diplomate BCVA, assistant professor of anesthesiology, in leading a team that grew to as many as 50 volunteers helping Peli Brown grasp basic life skills necessary for survival in the wild. These included flight training to build strength and endurance, and training to capture and consume live fish prey.

As the rehabilitation progressed throughout the semester, some students assisted in Peli Brown’s diagnostics and radiographs with Gilda Rawlins-Vaughan, DVM, diagnostic imaging instructor and lead for imaging at Ross Vet’s small animal clinic.

Drs. Stewart and Escobar also engaged student volunteers from several organizations, including the Avian Club, which Dr. Escobar serves as faculty advisor, the Zoo, Exotics, and Wildlife (ZEW) Club, and SKSTMN. Over 300 volunteer hours were spent with Peli Brown throughout the three-month rehabilitation on campus.
“Wildlife cases require quite a bit of thinking outside of the box to accommodate appropriately because we are not in a controlled environment with predictable behaviors, schedules, and outcomes. You really get to see the creative and endurance side of the staff you are working with. It requires significant investment of time and strength – both physical and emotional, and takes a unique personality to endure and persevere.”

Brown pelicans (Pelecanus occidentalis) are gregarious birds that congregate in big flocks for most of the year, and Dr. Stewart said the release location had been selected with this and other factors in mind. She noted while he could possibly be anywhere on island, birdwatchers would most likely spot him on the Caribbean Sea side of the island, and should keep their distance.

This species is a symbol of the success of wildlife and ecosystem conservation,” said Dr. Stewart. “On behalf of Ross Vet, we are grateful to have played a small role in the continuation of this process through the rehabilitation of Peli Brown.”

This species is a symbol of the success of wildlife and ecosystem conservation,” said Dr. Stewart. “On behalf of Ross Vet, we are grateful to have played a small role in the continuation of this process through the rehabilitation of Peli Brown.”